Life and work of Marija Gimbutas

Lithuanian roots and the first two decades of her life spent in her homeland had had an enormous influence on the subject of research which she carried out on emigration. They also lay foundation for her deeply personal approach to the studies on Goddess, the focal point of her work. 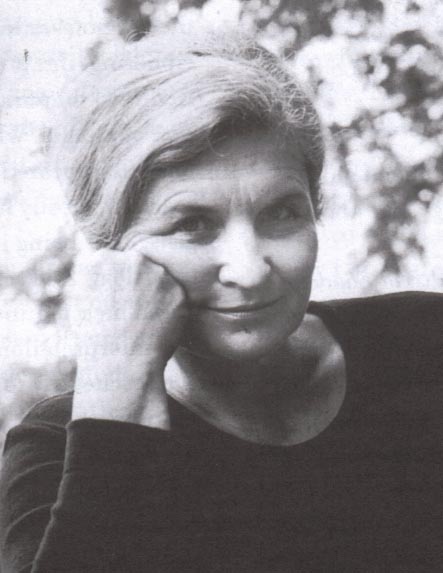 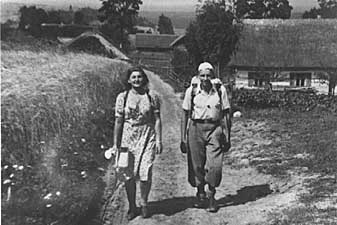 This is how she wrote about her childhood in a country where many pagan beliefs persisted: “I was exposed to many things which were almost prehistoric. (…) I had quite a lot of direct connections to the Goddesses. (…) The Goddess Laima was there, she could call at night and look through the windows. When a woman is giving birth she appears, and the grandmother is there organizing things. She has gifts for the Goddess towels and woven materials are laid out for her, because she weaves the life, she is a spinner.” Still a secondary school student, fascinated by the folklore, beliefs and death rituals, she roamed the country collecting old traditional songs and stories. Later she went on to study linguistics, archeology, ethnology and folklore in search of an answer to the ever present question: “What is my own culture?”

The war forced her to emigrate. In 1944, fleeing the Red Army together with her husband and young daughter, she reached Vienna, and then Tubingen, where she continued her studies in archeology, ethnography and history of religion. In 1946 she received a doctorate in archeology based on a dissertation “Prehistoric Burial Rites in Lithuania.” After a few years of work at the universities in Heidelberg and Munich, in 1950 she emigrated with her husband and two daughters to the USA (her third daughter was born there).

She immediately found a job at Harvard, where she undertook in-depth research into prehistoric times of Eastern Europe. The outcome was her opus magnum Bronze Age Cultures of Central and Eastern Europe (1965), which earned her a reputation as a world-class specialist on Bronze Age Europe. At the same time, in a monograph The Prehistory of Eastern Europe, she presented the so-called Kurgan hypothesis (the name refers to burial mounds), which she developed and improved until 1977. Marija Gimbutas formulated the hypothesis that the cradle of the Indo-European culture were the steppes of Eurasia, precisely speaking the area north of the Caspian Sea, and the Proto-Indo-Europeans were a pastoral warrior people who, thanks to the domestication of the horse (approx. 5000 thousand years BC), was able to travel long distances and invade still further regions in Europe, Anatolia, Syria, as far as Palestine. It was a long process of effective invasion and, simultaneously, the spread of the Proto-Indo-European language (approx. 4400–2800 BC), which happened in three waves.

Thus Gimbutas questioned not only the dominant Anatolian hypothesis, according to which the first home of the Indo-Europeans was Anatolia, but also many beliefs on the beginnings of the European civilization. It was no surprise that her theory met with a cold reception in the academic circles. However, it was hard to undermine her competence as a scientist and her vast knowledge, which she had already demonstrated on numerous occasions. It is worth reminding that her scientific output consists of around three hundred publications and twenty books. 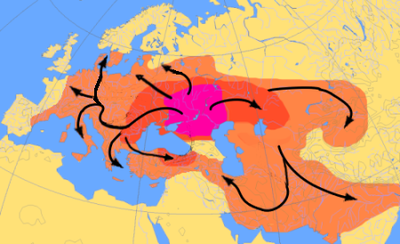 Magenta – homeland of the Indo-Europeans 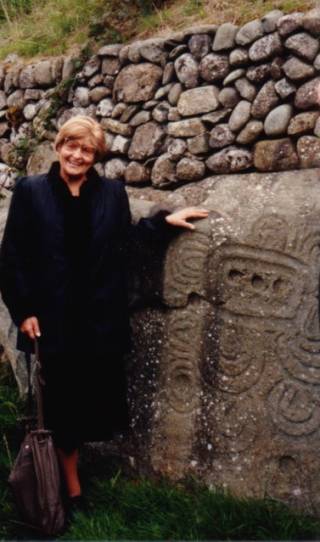 A turning point in her research came with the excavations she directed in southeastern Europe after transferring to UCLA in Los Angeles. The excavations lasted for fifteen years starting in 1967. “When I was travelling in Europe and visiting museums I was already building some understanding of what this culture was like before the Indo-Europeans, before the patriarchy. (…) It was always a big question mark to me: what could it be? This is so different. Painted pottery for instance, beautiful pottery. And then the sculptures. Nobody really was writing about it. There were so many of them, wherever you went you found hundreds and hundreds.”

The longer she carried out her archeological work, the more convinced she became that in the Neolithic times a highly developed culture had to exist in southeastern Europe, since it was capable of producing such exquisite works of art, among which, for some important reason, representations of the female form dominated. Excavations from deeper, older layers were more sophisticated than those from shallower, chronologically later ones, which suggests that, instead of expected progress, it must have reflected some cultural regress.

“I don’t know how it happened, at what moment, but I started to distinguish certain types and their repetition. For instance, the bird and snake goddess which are the easiest to distinguish.” Similarly, numerous representations of naked female forms with a clearly outlined triangle of the vulva or exposed vagina couldn’t have been – contrary to what many archeologists still believed back then – “pornographic objects” but characteristic for the Neolithic (and also Paleolithic) times way of honouring the female, creative power of giving life, or in other words Goddess. And thus each excavation brought next fascinating discoveries, more pieces of the puzzle were coming together, forming a surprisingly coherent whole, which she described with growing precision in her books.

Symbolic language of the Goddess

The first book – Goddesses and Gods of Old Europe – was published in 1974 under a title changed by the publisher to Gods and Goddesses of Old Europe. Clearly, at that point it was still unimaginable to put the so-called female aspect first in the title, not to mention the content of the book, which went against widely held beliefs and undermined the sacrosanct patriarchal stereotypes. Gimbutas’s interdisciplinary approach, in which she combined her vast knowledge from the area of linguistics, ethnology, history of religion and mythology with archeology, was also criticised. It didn’t stop her from following the path of bringing together what in her view was superficially and unnecessarily separated and fragmented, and presenting a coherent revolutionary perspective. It resulted in three exquisite books, in which she described her theory in a complete, mature and extremely well-documented form.

Published in 1989 The Language of the Goddess, as the title itself suggests, describes the language of symbols which recur on ceramics, sculptures, figurines and frescoes, even in cave paintings, starting from the Paleolihtic times, with the main focus on the Neolithic times and up to Bronze Age. Deciphering the meaning of symbols and representations of the Goddess, Gimbutas creates a kind of coherent symbolic alphabet, which allows us to understand the cult of Goddess, the life philosophy and paradigm of the pre-Indo-European culture, so radically different from the one created by patriarchy.

A full description of the culture which she called the civilization of Old Europe is presented in the following, equally extensive and insightful publication Civilization of the Goddess – The world of Old Europe (1991). She describes the culture as peaceful, egalitarian, with an economy based predominantly on agriculture. The civilization of Old Europe created writing older than that from Mesopotamia, as well as impressive art. In the light of the amassed research material, Gimbutas came to the conclusion that the culture had existed for at least three thousand years (6 500–3 500 BC) in the south of Europe and, where the Indo-European warriors had not reached until the third millennium BC much longer (till the middle of the second millennium on Crete). Conquering the native people, the warriors from the steppes of Eurasia imposed a new language, a radically different cultural, social and religious structure, as well as the ethos of war and dominance together with a high rank of warriors in a hierarchical society. “The Indo-European social structure is patriarchal, patrilineal and the psyche is warrior. Every God is also a warrior. The three main Indo-European Gods are the God of Shining Sky, the God of the Underworld and the Thunder God. The female goddesses are just brides, wives or maidens without any power, without any creativity.”

It can be inferred that for the native people it had to be an incredible culture shock on every level, starting with their religion built around the cult of Goddess, through their radically different, matrilinear and matristic social structure. “I call it matristic, not matriarchal, because matriarchal always arouses ideas of dominance and is compared with patriarchy.” 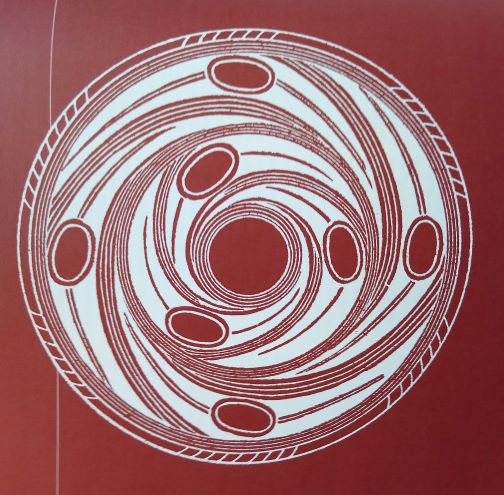 In the centre of the religion and what can be called life philosophy of Old Europe was Goddess, understood as the core, immanent power of self-creation and self-regeneration which pertains to life. Life, whose intrinsic aspects are death and passing, thus symbolic representations of death were invariably accompanied by symbols of regeneration. The central position of women in society and religion reflected that life-affirming perception of reality, so it is unfounded to project our misguided assumption founded in patriarchy that it entailed domination and subordination of the weak by the strong or one sex by the other.

This projection – one of many treated as obvious by traditional science – gives birth to many misunderstandings which accompany interpretations of Marija Gimbutas’s work to this day, both in its criticism and appreciation. Both have a tendency to present it in the context of the “battle of the sexes.” However, a discerning reader will find no trace of it, no matter how big a magnifying glass they will use in the analysis of her output. That of course on condition that the reader will be willing to approach it with an open mind, free from the constraints of deeply-entrenched cultural stereotypes. We encourage you wholeheartedly to attempt it, knowing from experience how incredibly creative and inspirational the study of Marija Gimbutas’s work can be for anyone who seeks answers to questions about our cultural and spiritual European roots. We recommend to begin with The Living Goddesses, the last and at the same time first which was written for a wide audience, in a language more accessible than the strictly scientific one. There we will find a clear summary of earlier discoveries together with the newer ones made between 1991 – 93. Marija Gimbutas continued work on her book till the last moments of her life. It was interrupted only ten days before she passed away, when she was forced to hospitalize. She died on 2nd February 1994 in Los Angeles. Miriam Robbins Dexter, her disciple, undertook the task of the final edition of Marija Gimbutas’s book. In the introduction she writes: “The manuscript manifested her love, perseverance and hope, for she continued to work and rework it in spite of great physical pain, using her strength to shape it enough so that it could be finished by any editor.”

All quotes in the text except the last one are from the interview with Marija Gimbutas: https://thesomathread.com/2016/04/03/interview-with-marija-gimbutas/ [access: 20.03.2021]. 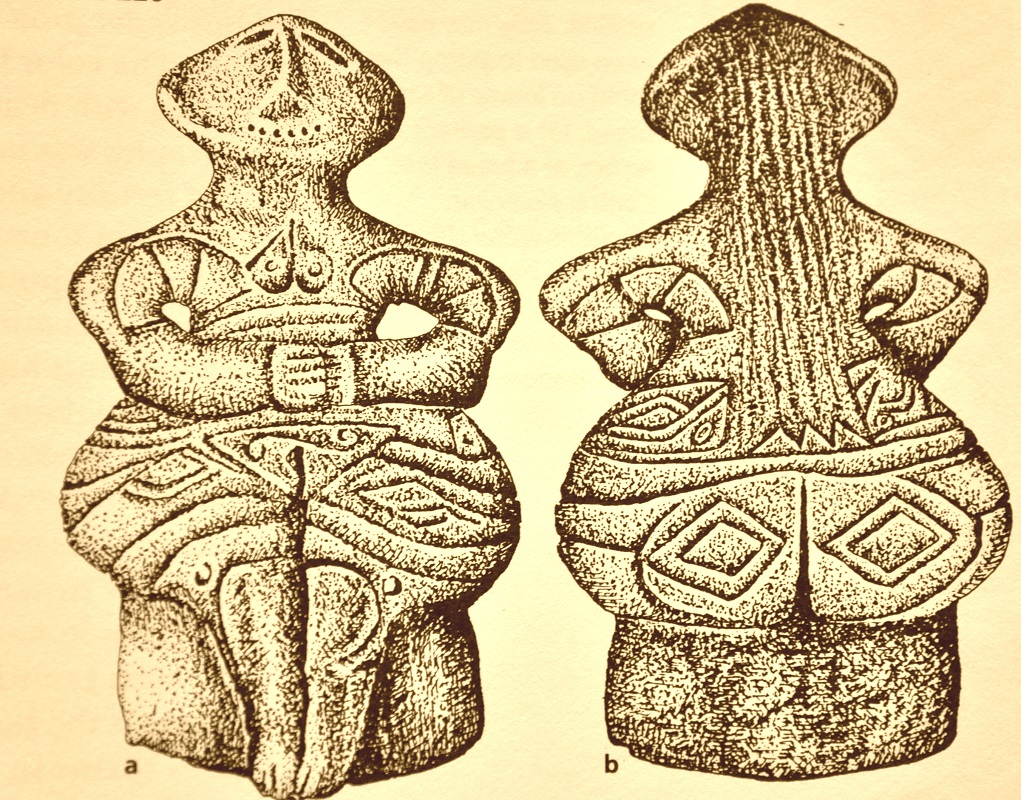 We invite you to a series of open lectures